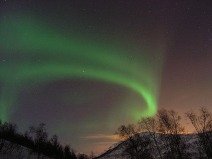 And in the same region there were shepherds out in the field, keeping watch over their flock by night. And an angel of the Lord appeared to them, and the glory of the Lord shone around them, and they were filled with fear. Luke 2:8-9

St. Luke tells the story of shepherds in the fields, watching and protecting their flock. Shepherds in those days were not educated people; it was not a glamorous job. Artwork depicting this scene is most certainly a little askew as many images portray humble men in flowing tunics. Such was not necessarily the case, being a shepherd was a lonely dirty job and shepherds were not pillars of society. Yet, regardless of their status, or perhaps because of it, God chose them to be the first to hear the announcement of Christ’s birth.

Away from the city, in the fields alone, suddenly, instantly, an angel of the Lord appeared to them saying “Don’t be afraid.” How could these shepherds not be afraid? One moment they are watching their flock and the next they are confronted by an angel. Then all at once, they must have also been blinded by a great light because “the glory of the Lord shown all around them.” Don’t be afraid? Luke tells us that they were terrified. But imagine their full range of emotion when there hear the good news for the first time.

“Unto you is born this day in the city of David a Savior, who is Christ the Lord.”

God’s angel announced the birth of the long awaited Messiah to those simple, dirty, uneducated men watching sheep in the fields. And suddenly, if that weren’t enough, standing in front of them was a sight they never could have imagined. Among them was not only one angel, but a choir of the heavenly host. There were hundreds of thousands of angels! The company of God’s angels came to earth that night singing “Glory to God in the highest!” The only witnesses? A band of shepherds and their sheep.

The announcement heard so many years ago by shepherds in the fields was missed by the world. Shepherds sang for joy and angel choirs sang sweetly or’e the plains while in a crowded town the Messiah’s birth went unnoticed. It is the same announcement made today. God’s power made perfect, coming as a child born of lowly parents. Even as churches all over the world sing Glory to God in the highest, a fallen humanity is caught up in worldly concerns. Many continue to miss the announcement of Messiah’s birth.

People of God, listen. Listen and hear the echoes of sweet music accompanying beautiful voices as they announce the birth of Christ. Listen and reflect as angelic choirs sing Glory to God in the highest, because God has saved his people through power; power perfected through weakness; the power of Love.

Glory to God in the highest! And on earth, peace and good will! Amen.