Our Rescue from Sin 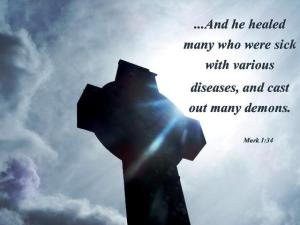 In January of 1982, a jetliner bound for Fort Lauderdale, Florida took off from Washington National Airport. The plane took off in the midst of a winter storm bringing freezing winds and blinding snow. Air Florida’s flight 90 only reached a few hundred feet in altitude before it fell from the air and crashed into the 14th Street Bridge and finally plunged into the icy waters of the Potomac River. In the midst of the chaos, only a handful of passengers and crew members survived and clung to a piece of the tail wreckage. Their rescue was made most difficult because of the freezing conditions and icy waters of the river.

Finally, a police helicopter arrived on the scene. The crew lowered a line to the surviving travelers in the water and began lifting them to safety. With little strength and suffering from hypothermia, one by one they struggled to survive. As the copter returned for another passenger, one man in particular continually passed the life line to the others ahead of him. He insisted on helping others reach the safety of the shoreline. Finally, as the helicopter returned one last time to retrieve him, the man who so unselfishly helped others was nowhere to be found. He was later found among the wreckage of the plane. This man, who died to save others, is the only person listed in the flight 90 disaster to have lost his life due to drowning.

Along the banks of another body of water, Mark tells us about the beginning of Jesus’ mission to rescue God’s people from demons, sickness, sin and death. Jesus came with authority like no other. He commanded unclean spirits to leave those whom they possessed. He cast out many demons and cured people of their disease and sickness. Scripture tells us that all were amazed at what they had witnessed and Jesus’ fame grew rapidly. But fame was not Jesus’ objective; Jesus came so that God’s people may be saved from the powers of evil and have life everlasting. He demonstrated the lengths God would go in order to save his people, even to the point that it would cost Jesus his life.

To this day, Christ calls the people of God to speak with the authority of Holy Scripture. Our Lord calls the Church to proclaim the gift of his grace through the victory won upon the cross. His example of self-giving sacrificial love is reflected by many who put the lives of others ahead of their own. When we strive to meet the needs of our neighbor, showing them the love of God, we live into the power and authority of the gospel.

Arland D. Williams Jr. is not a household name; most have never heard of him. Yet there are five people who lived thanks to his unselfish acts in January of 1982. As the wreckage of Flight 90 was sinking into the icy Potomac, Mr. Williams struggled to save others, even to the point that it cost him his life. Following the news of his heroism, the 14th Street Bridge now bears his name and is called the Arland D. Williams Jr. Memorial Bridge.

Following Jesus’ rescue of humanity from sin and death, those who believe he is the Christ also bear the name of our Savior. Drowned to sin and retrieved from the flood of Baptismal waters, we are saved from the consequences of our sin. We are named Christian and called the children of God.

This entry was posted in Gospel According to Mark, Grace and tagged Jesus casting out demons, Jesus heals, Jesus saves, Love of God, Love your neighbor, Preaching with authority, Rescue from sin, Saved by Grace. Bookmark the permalink.