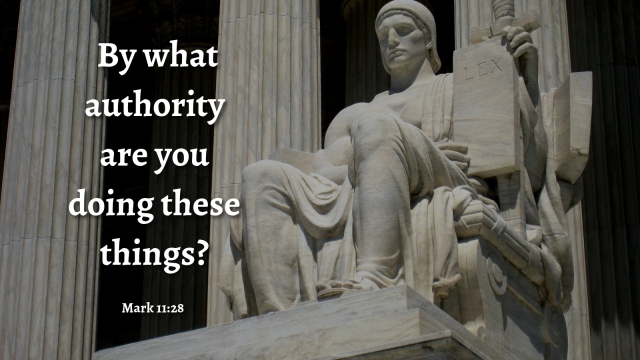 The day after Jesus drove the merchants and traders out of the temple, the chief priests, scribes and elders of the temple put Jesus on the spot, questioning his authority to do such things. They expected a direct answer. Instead, Jesus answered with a question of his own. Jesus’ hour had not yet come; if he said he did these things by his own authority, he would be arrested for disobeying the temple laws. If his answer was that he acted on God’s authority, blasphemy would be the charge. Understanding this, and knowing the hearts of those who would accuse him, Jesus turned their question around on those who abused the authority they’ve been given by God, replacing it with a perceived authority all their own.

All too often, the church faces the dilemma of authority. Certainly, God calls leaders for his people and gives them authority to act on his behalf. Yet, we have seen it happen time and again that sin, our age old rebellion, creeps into the life of the church and challenges what God has set in place. Both clergy and lay leaders are susceptible and must remain open to the guidance of the Holy Spirit. We need to recognize the difference between what is real and what is perceived.  So how does the church tell the difference? The answer is tested by truth.

Authority that is exercised in the truth of the gospel is revealed as a reflection of the life and light of Jesus Christ. The chief commandments to love God and love neighbor become the guiding factors for decisions and activities. The leader striving to exercise God’s authority seeks to do his will. When shortcomings become evident, the faithful leader humbles himself and relies upon God’s mercy and grace.

Perceived authority, or authority that is abused, cannot stand in the light of truth. Perceived authority most often leads to abused authority. The fruit of such is conflict, division and brokenness. It is not open to the power of the Holy Spirit, is slow to see the truth and does not readily take responsibility for negative outcome. Yet again, God is merciful.

Jesus is the model for faithful leadership; the leader’s authority is found in him. When sin and brokenness creep into the life of the church, faithful leaders recognize such issues, confronting them in the way Jesus taught. In his name, we speak the truth in love and forgive the sins of others as God forgives us. We recognize our own faults and seek to reconcile all involved through Christ Jesus our Lord.

Merciful God, guide us by the example of your Son; make us willing to bow to your authority. Amen.

This entry was posted in Gospel According to Mark and tagged Authority, Authority of Jesus, Christianity, Church, faith, Forgiveness, Gospel, Gospel of Mark, Jesus Christ, religion, Teaching of Jesus, temple. Bookmark the permalink.